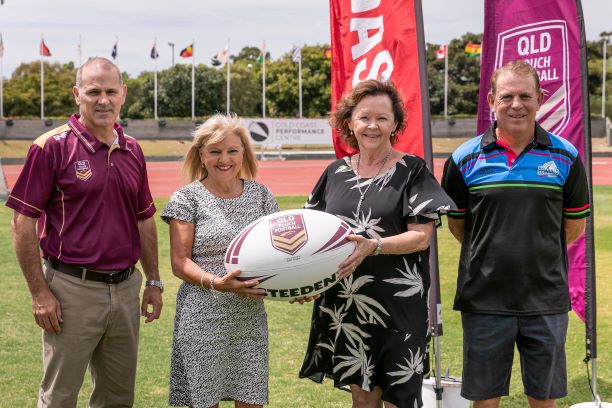 Queensland Touch Football CEO, Greg Denny and QLD All Schools Tournament Director, Peter Bell announced today that the 2021-2023 QLD All Schools Championships will relocate to the Gold Coast thanks to the support of Major Events Gold Coast.

The move hopes to address field capacity issues and provide facility upgrades that will allow the event to continually grow on the Gold Coast.
Cr Donna Gates, Deputy Mayor – City of Gold Coast attended the announcement today and was equally excited, “what a fantastic announcement and a huge vote of confidence in our city as we look towards a post Covid events future”.

“To see these students and their families here, not only in 2021 but for three consecutive years, will showcase the facilities, hospitality and lifestyle that the Gold Coast is famous for,” she said.

The event, now in its 39th year, is the world’s largest annual touch football tournament for secondary schools, with over 430 teams representing various schools both nationally and internationally.

The relocation of the event will see the tournament held from Wednesday 6 October – Sunday 10 October 2021 at a world class Gold Coast Performance Centre.

“I am delighted to see the Gold Coast has secured another great event. What better place for the Queensland All Schools Touch Football Championships to call home for the next three years than Australia’s Playground, the Gold Coast!” said Jan McCormick, CEO – Major Events Gold Coast.

Peter Bell, Tournament Director of Queensland All Schools said, “The event has come a long way since the first Qld All Schools event in 1983 and bringing it to the Gold Coast is just another leap forward”.

The event provides the opportunity for schools from across Queensland and the world to participate in a multi-day Touch Football Tournament, featuring boys and girls divisions in under 13 and 15, and boys, girls and mixed divisions in under 18 years, competing for their chance to be crowned Champion in their age division.